Dalai Lama: The Purpose of Life is Happiness 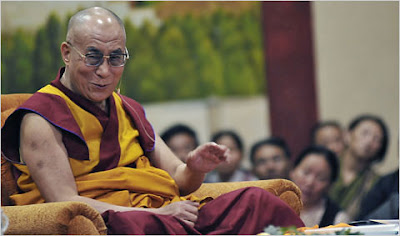 “Dream — nothing!” is one of the many things I’ve heard the 14th Dalai Lama say to large audiences that seem to startle the unprepared. Just before I began an onstage conversation with him at New York Town’s Hall this spring, he told me, “If I had magical powers, I’d never need an operation!” and broke into guffaws as he thought of the three-hour gallbladder operation he’d been through last October, weeks after being in hospital for another ailment. For a Buddhist, after all, our power lies nowhere but ourselves.

We can’t change the world except insofar as we change the way we look at the world — and, in fact, any one of us can make that change, in any direction, at any moment. The point of life, in the view of the Dalai Lama, is happiness, and that lies within our grasp, our untapped potential, with every breath.

Easy for him to say, you might scoff. He’s a monk, he meditates for four hours as soon as he wakes up and he’s believed by his flock to be an incarnation of a god. Yet when you think back on his circumstances, you recall that he was made ruler of a large and fractious nation when he was only 4 years old. He was facing a civil war of sorts in Lhasa when he was just 11, and when he was 15, he was made full political leader and had to start protecting his country against Mao Zedong and Zhou Enlai, leaders of the world’s largest and sometimes least tractable nation. (.....continued - to read the rest of this New York Times article, click here.)

Thanks to Del Nett for emailing me this article.